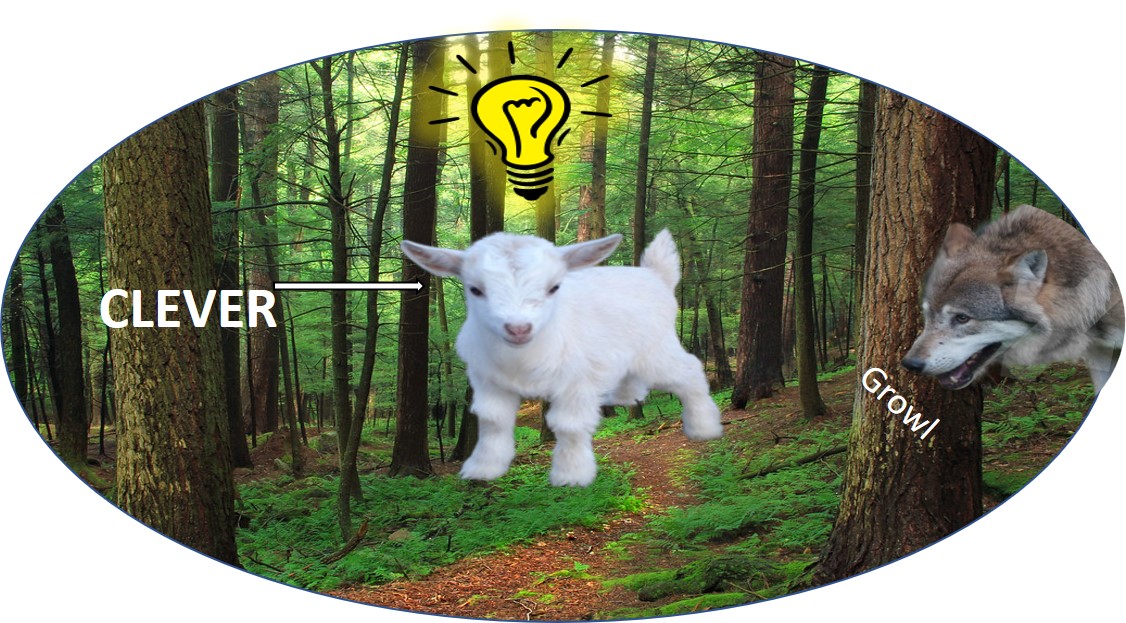 Once upon a time there lived a little baby lamb. Though she was very cute and small and looked quite fragile, she was very smart. One fine day when the sun was up and the sheep were grazing on the grass in the field, the clever little lamb was playing with her friends.

While playing, she got lost in the woods which were just nearby. No one would have noticed her leave, as there were a lot of sheep and practically no one to take care of her. The little lamb was now very frightened.

She ran and ran all she could and reached a little clearing. This little clearing looked quite familiar though. She looked around and saw a huge hill nearby. Suddenly, it struck her.

One day, a few months earlier, her mother had told her not to ever cross that huge hill, because on the other side there were wolves, foxes, mountain lion and bears that could eat her up for lunch. Now she was really scared and started trembling.

She sat down in the clearing for a while. She knew the farmer who took care of the herd that she lived with had a barn just on the other side of the hill, but she was too tired to cross it just know. But little did she know; a hungry wolf was lurking nearby…

After she had some rest she started to get hungry. The sun had nearly gone down by now and everyone would be looking for her. Although she knew very well she would get a good scold from her mother, she started up the hill.

Suddenly, the little lamb heard a slight rustle from the nearby bushes. She bolted back in terror, falling hard on the floor in the clearing. She checked around once again.

“Just a squirrel” she thought. There were lots of squirrels around this part of the hill, but that also meant a lot of predators ready to hunt them… and maybe even her! Hesitantly, the little lamb walked all the way up and over the hill and into the field on the other side.

But to her surprise, everything was empty! No sheep, no sheep dogs, no stacks of hay and, expectedly, not much grass left (sheep tend to eat a lot). She walked around for a bit trying to find the other but there was no one. Maybe they had just got tired of munching all day or the shepherd called them in early (It was the second one).

Tired of waiting, she again got hungry and started munching on the grass. The sun was just setting in the horizon, and the wind rustled through her thin wool coat. Then suddenly, there was a growl behind her

Terrified, the little lamb turned around, and was alarmed to find herself face to face with a wolf! The beast licked his lips menacingly, and his teeth glimmered like living creature ready to tear her apart.

“Oh, please don’t eat me! I have just had a few kilograms of grass and I would not be very appealing to eat. If you wait for some time, let me dance so all this grass in my stomach can digest faster, you can eat me with all the pleasure you want!”

The wolf’s malicious smile quickly blanks out and he looked at her as if she was straight out of a sci fi movie.

“All right then, as you wish.” The wolf agreed. “But please dance a bit fast – I am hungry and need some food in my stomach as well.”

“Yes, yes, don’t worry, I will dance my best and fastest to empty my stomach” the little lamb said. “Actually, I have an idea – let me give you this bell here so that I don’t have much weight on me and it is easier for me to dance. Also, can you ring it really fast? Trying to keep up with the beat I will digest this food faster.”

The wolf once again agreed (he was really hungry now) and started to ring the bell. The lamb danced, as promised, and also danced quite fast so that the wolf wouldn’t stop ringing the bell.

And, just as she wanted, her shepherd came to the rescue and scared of the wolf. And the clever little lamb, was saved by her brains.

After clicking on the above URL, You will reach to our YouTube channel named “Shiv Kids Education” with a Home page that contains recently added videos. You can access all videos by clicking on the “VIDEOS” tab over there and can also view playlist videos by hitting the “PLAYLIST” tab option.

Enjoy here other topics as well by clicking on the below-given links, We ensure that you would have a wonderful GK Quizzing!,Learn English vocabulary , Worksheets , Online Maths Time Tables Practice , Online Maths Addition,Subtraction,Multiplication & Division Test and many more..

Back to Top
error: